Make a donation and watch a replay of the event! 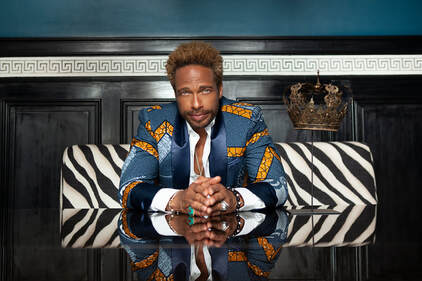 ​From the time he was a young lad, Gary Dourdan knew that he wanted to be an actor. Despite a myriad of interests, which included music, athletics and even breakdancing, Dourdan focused much of his passion centered on acting. His determination, of course, eventually paid off - after an increasing series of television guest spots that led to regular series roles, he came to prominence in the "Alien" film franchise in 1997, officially starting him on the path towards stardom. While the one-time New Jersey native worked steadily, it was his role as forensic investigator Warrick Brown on "CSI: Crime Scene Investigation" (CBS, 2000-15) that put him on the map, introducing Dourdan to a large audience week after week and establishing him as a top-notch television star.

Born in Philadelphia, Dourdan was raised by his creative-minded mother, a fashion designer, and father, an agent who represented jazz musicians. Dourdan was the youngest child in a family of five; a mixture of various ethnicities including, among others, African, European and Native American . As a child, he excelled in music, playing a variety of instruments including piano, guitar and saxophone.

Dourdan studied with legendary acting coach Lee Strasberg, and by the end of the 1980s, began performing in off-Broadway plays. After meeting "A Different World" (1987-1993) producer Debbie Allen in Paris, Dourdan was cast in the role of Shazza Zulu, a recurring gig he played for over two seasons. Dourdan was then plucked by pop star Janet Jackson to be the object of desire in the 1993 video for her single "Again."

In 1996, Dourdan landed the role of Yates in the Touchstone Pictures-based action drama "Playing God" (1997), then was part of a six-month shoot in Los Angeles for "Alien: Resurrection" (1997) and the independent drama "Thursday" (1998).

Dourdan later decided to return to television. In 2000, he appeared in the ABC movie "Muhammad Ali: King of the World," taking on the formidable role of the iconic Malcolm X. Back in features, Dourdan headlined the independent drama thriller "Trois" (2000), then appeared in Reggie Bythewood's Hollywood drama "Dancing in September" (2000). By April 2000, Dourdan had been recruited for the crime procedural, "CSI: Crime Scene Investigation." Picked up for the fall season, the series revolved around a forensics investigating unit in Las Vegas, with Dourdan playing Warrick Brown, a smart, complex and moody investigator with a shaky past as a gambler. The show quickly took off with critics and viewers, later paving the way for two successful "CSI" spin-offs.

As part of a dramatic ensemble, Dourdan and his castmates were acknowledged with Screen Actors Guild Award nominations in successive ceremonies between 2002 and 2005, with the team finally taking home the statue in 2005. Dourdan himself was singled out by NAACP's Image Awards for nominations five years running, between 2002-07. In 2003 and 2006, he won his category as "Outstanding Supporting Actor in a Drama Series." He next essayed another real-life political figure, Black Panther George Jackson, in "Black August" (2003). With little time for outside screen work beyond his day job, he made an appearance as Captain Burke in the oft-reshot sci-fi thriller "Imposter" (2002). In 2006, Dourdan co-starred opposite Halle Berry as her on-again, off-again boyfriend in the thriller "Perfect Stranger" (2007).
​
Recently, Dourdan has been seen on the ABC series “Mistresses” BET’s “Being Mary Jane” and Starz “Power” and the recently released “Redemption Day “ Gary has kept busy with recording and performing live music.